The Apollo Presents the Return of Africa Now! Festival Live and In Person with Somi and Friends: The Reimagination of Miriam Makeba, a Concert Featuring East African Jazz Vocalist and Grammy Nominee

Festival line-up includes screening of Queen of Glory by actor and director Nana Mensah (Netflix’s “The Chair”), a performance by Congolese dancer, singer, and multi-instrumentalist Nkumu Katalay with DJ YB, and more 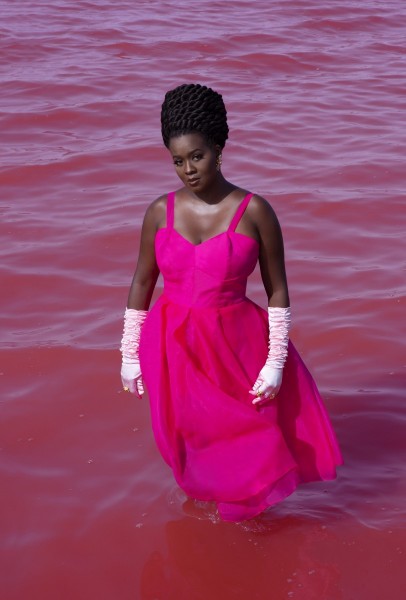 Harlem, NY – (February 24, 2022) – The Apollo’s -annual Africa Now! festival returns this April, headlined by Grammy-nominated, East African jazz vocalist Somi—celebrating the launch of her forthcoming album that honors the late South African singer-songwriter and civil rights activist Miriam Makeba. Set to debut on March 4, marking what would have been Makeba’s 90th birthday, Zenzile: The Reimagination of Miriam Makeba is an album accompanying Somi’s musical production Dreaming Zenzile, featuring Somi in the role of Makeba, an artist whose music criticized apartheid, placing her at the forefront of political activism. Somi will be joined by award-winning jazz singer Dianne Reeves, South African musician and vocalist Thandiswa Mazwai, and composer and vocalist Msaki.

Music and entertainment from the continent continues to drive trends across all facets of culture around the globe. The Apollo’s Africa Now! Festival returns for its eighth year to celebrate the best cultural innovators from the African Diaspora. This year’s festival takes place from March 4 through March 19.

“We're thrilled to welcome back our Africa Now! celebration and to continue honoring and presenting contemporary art from the African diaspora,” said Kamilah Forbes, the Apollo’s Executive Producer. “Over the past eight decades the Apollo has amplified Black voices and used its platforms to create an intersection of art and activism, so having Somi, a contemporary artist and activist, perform new music from her upcoming album that honors the late Miriam Makeba, a respected musical and activist icon of the 1960s, is exactly the kind of artistic conversation and experimentation that the Apollo champions.”

Somi was closely mentored by the legendary trumpet player Hugh Masekela, who was a longtime collaborator to Miriam Makeba. Makeba and Masekela were both prominent figures in African jazz music and activism in South Africa and around the world, acclaimed for their musical talents and popular songs that were critical of apartheid. Their visibility earned them monikers such as “Mama Africa” and “the Father of African Jazz.” Both Makeba and Masekela performed several times at the Apollo in the 1960s, sometimes together and often with other jazz artists and musicians, including John Coltrane and Machito and His Afro Jazz Band in an ensemble concert. Somi’s musical production Dreaming Zenzile made its world premiere at The Repertory Theatre of St. Louis in 2021 and is touring in theaters across the country ahead of its Off-Broadway debut at New York Theatre Workshop in Summer 2022.

In addition to Somi’s one night only performance, the festival kicks off on March 4 with Apollo Comedy Club featuring digital host and comedian Akintunde, as seen on Comedy Central Alfred Kainga, founder of Feel the News Marcela Onyango, and comedian and actor Yedoye Travis with music by DJ Qool Marv. The festival also includes an Apollo Music Café performance featuring Congolese dancer, singer, and multi-instrumentalist Nkumu Katalay and DJ YB on March 5, a screening and post-film discussion of Apollo Film: ImageNation’s Cocktails and Sol Cinema – Queen of Glory, by director Nana Mensah (Netflix’s “The Chair”) who vividly captures the Ghanaian-American experience of being caught between two worlds in her film on March 10, and a virtual Apollo Livewire discussion curated by Ethnomusicologist Fredara Hadley in dialogue with contemporary artists about some of the legendary artists and historic performances by artists from the continent on March 15. The festival culminates on March 19 with Somi and special guests Dianne Reeves, Thandiswa Mazwai, and Msaki.

Looking ahead to 2022, the Apollo will offer a dynamic line-up of free and ticketed programs in person at the Apollo’s historic theater and online on the Apollo Digital Stage. Highlights include the long-anticipated return of the Amateur Night at the Apollo competition on Wednesday, February 16 at 7:30pm EST and on select Wednesdays thereafter; Apollo Master Artist-in-Residence Ta-Nehisi Coates and The Roots’ Tariq “Black Thought” Trotter, in conversation; the Lyricist Lounge 30th Anniversary Concert featuring hip-hop trailblazer KRS-1 and others to be announced; the premiere of The Gathering: A Collective Ring Shout, co-presented by the American Composers Orchestra and the Apollo and co-curated by National Black Theatre, and more. As with all of its programming, the non-profit Apollo’s season centers Black artists and voices from the African Diaspora with myriad opportunities for artists and audiences to come back together at the iconic theater. For a complete line-up and more information about the Apollo, please visit www.ApolloTheater.org.

Thursday, March 10 – Apollo Film: ImageNation’s Cocktails and Sol Cinema – Queen of Glory 6:00pm EST reception, 7:00pm EST screening  Apollo Soundstage – Live and In-Person  Tickets: $25  Presented as part of the Apollo’s Africa Now! festival, director Nana Mensah (Netflix’s “The Chair”) vividly captures the Ghanaian-American experience of being caught between two worlds in her film, Queen of Glory. Sarah Obeng is set to move to Ohio with her boyfriend when her mother suddenly dies. She must then pick up the pieces of her mother’s life and put together a traditional Ghanaian funeral in New York. In the end, Sarah uncovers more than she initially expected as she explores the world her mother left behind. The evening will include a post-film conversation with the filmmaker.

From Babatunde Olatunji/Olatunji Dancers, Hugh Masekela, Miriam Makeba, Salif Keita, Burna Boy, Somi, and others, the Apollo stage has provided a nexus between the African and the African American performance experience. Curated by Ethnomusicologist Fredara Hadley, she will be in dialogue with contemporary artists about some of the legendary artists from the continent who have performed at the Apollo and the significance of the Apollo’s Africa Now!.

Somi Kakoma was born in Illinois to immigrants from Rwanda and Uganda, and is an acclaimed vocalist, composer, and writer of African jazz, soul, and pop. Her album Holy Room - Live at Alte Oper with Frankfurt Radio Big Band (Salon Africana 2020) earned her a 2021 Grammy nomination for Best Jazz Vocal Album and made her the first African woman ever nominated in any of the Grammy jazz categories.  The album also won the 2021 NAACP Image Award for Outstanding Jazz Vocal Album.

Also recognized for her activism in her music and civic engagements, her studio album Petite Afrique tells the story of African immigrants in the midst of a gentrified Harlem in New York City and won the 2018 NAACP Image Award for Outstanding Jazz Album.

She has collaborated with artists such as Aloe Blacc, Angelique Kidjo, and Common on her recent projects. In addition to her Grammy and NAACP recognitions, Somi is also a Doris Duke Fellow, a TED Senior Fellow, and has participated in artist-in-residences at Park Avenue Armory, UCLA’s Center for the Art of Performance, and more.

Somi was recently named a Sundance Theater Fellow for her original musical Dreaming Zenzile about the great South African singer and activist Miriam Makeba. In September of 2021, the production, in which Somi also plays the role of Makeba, made its world premiere at The Repertory Theatre of St. Louis and will continue to be seen in theaters across the country until its forthcoming Off-Broadway debut at the New York Theatre Workshop in Summer 2022. Somi’s new studio album—that also honoring Miriam Makeba—will be released in March 2022 in tandem with the play. Somimusic.com

Tickets for Africa Now! Festival’s Queen of Glory, Apollo Music Café, and Apollo Comedy Club are $25, the Livewire discussion is free, and tickets for Somi and Friends: The Reimagination of Miriam Makeba start at $25. To purchase tickets to Africa Now! and all other events of the Apollo’s Winter/Spring 2022 season, visit www.ApolloTheater.org.

The health and safety of our audiences, artists, and staff is the Apollo’s top priority. Please note that all attendees must present a government-issued picture ID prior to entry and show a completed vaccination card authorized by the FDA or WHO against COVID-19 (dated at least 14 days before the show). Proof of vaccination can be displayed on smartphones. Proof of vaccination may also include a CDC Vaccination Card (or photo), NYC Vaccination Record, or an official immunization record from outside New York City or the United States. Photo ID for children under 12 will not be required if they are accompanied by parents/guardians with government-issued photo ID. All attendees are required to wear masks inside the theater, and there is no eating or drinking allowed. For a complete list of the Apollo’s COVID-19 safety protocols, please visit www.ApolloTheater.org.

The Apollo Presents the Return of Africa Now! Festival Live and In Person with Somi and Friends: The Reimagination of Miriam Makeba, a Concert Featuring East African Jazz Vocalist and Grammy Nominee