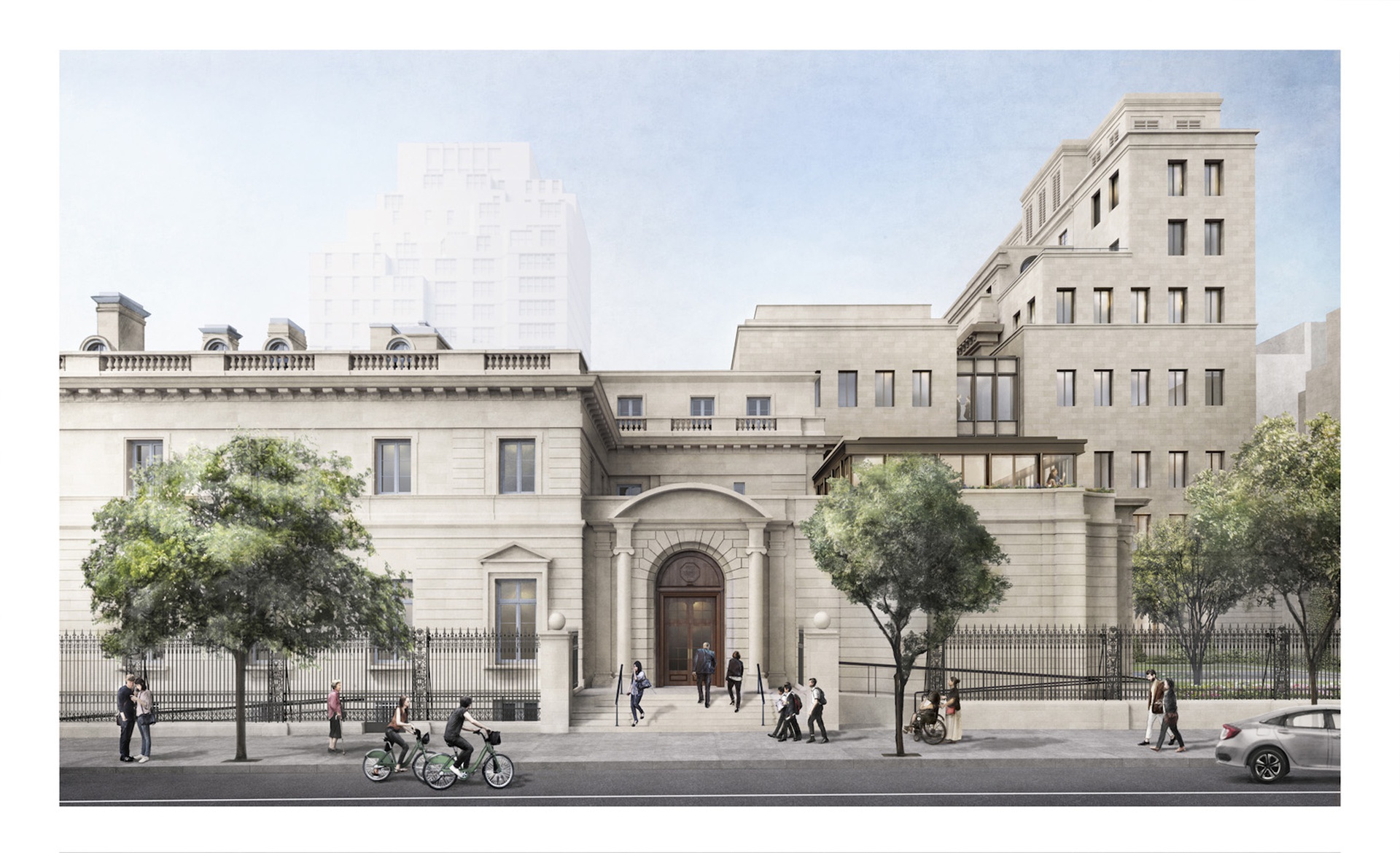 Image
Rendering of The Frick Collection from 70th Street; Courtesy of Selldorf Architects

The Frick Collection today unveiled the design for its expansion and enhancement by Selldorf Architects. Honoring the architectural legacy and unique character of the Frick, the plan provides unprecedented access to the original 1914 home of Henry Clay Frick, preserves the intimate visitor experience and beloved galleries for which the Frick is known, and restores the 70th Street Garden. Conceived to address pressing institutional and programmatic needs, the plan creates critical new resources for permanent collection display and special exhibitions, conservation, education, and public programs, while upgrading visitor amenities and overall accessibility. The project marks the first comprehensive upgrade to the Frick’s buildings since the institution opened to the public more than eighty years ago, in 1935.

The design was developed by Selldorf Architects, with Beyer Blinder Belle acting as Executive Architect. Esteemed garden designer and preservationist Lynden B. Miller will work with the Frick to restore the 70th Street Garden in keeping with the vision of its creator, Russell Page. The construction budget is $160 million.

“Working together with the Board of Trustees and senior management, Selldorf Architects has developed a design that at once honors the Frick’s unique architectural history and improves access for all visitors,” said Ian Wardropper, Director of The Frick Collection. “The project harmoniously integrates the historic with the new and addresses all areas of the institution, which encompasses a number of buildings and additions made over the course of the past century. We are grateful for the support and public feedback we have received to date as we embark on this initiative to further the vision of Henry Clay Frick for an enduring and ever-vibrant institution.”

“Our proposed design is the result of an unwavering commitment to maintaining the intimate experience of viewing art at the Frick that is unique and special to so many—myself included,” said Annabelle Selldorf, principal and lead designer of Selldorf Architects. “With interstitial architectural interventions, we are able to provide clear and coherent new spaces with seamless connections that will allow the Frick to more thoroughly enact its mission in the twenty-first century.”

Originally designed by Carrère and Hastings as a private home for Henry Clay Frick, the main building has not undergone a comprehensive upgrade since John Russell Pope transformed and expanded it into a public museum and created a purpose-built structure for the Frick Art Reference Library in 1935 as well as the Frick’s iconic interior Garden Court. The Frick’s holdings, attendance, and public and educational programs have grown appreciably in the past decades, and many of the institution’s critical functions—from the presentation, care, and conservation of its collections, to education programs and basic visitor services—are constrained and retrofitted into inadequate spaces in the century-old former residence. There is also a pressing need to renovate and replace building infrastructure throughout the museum and library, including the deep basement under the 70th Street Garden, upgrading these to contemporary state-of-the art systems.

Betty Eveillard, Chair of the Board of Trustees at The Frick Collection noted, “Together with Selldorf Architects, the Frick has set forward a plan that graciously ushers our institution into the twenty-first century while preserving our Gilded-Age grandeur and sense of tranquility. The plan addresses the needs of the visiting public, our professional staff, and the thousands of students and researchers who enjoy the museum’s galleries and rely on the vast resources of the Frick Art Reference Library. From helping us share with the public more of the building and our collections to introducing new views of the 70th Street Garden, the design reaffirms the Frick as a one-of-a-kind destination in New York City.”

The design honors the Frick’s history and preserves its unique aesthetic, while providing a natural and seamless flow throughout the Frick’s exhibition galleries, library, and public spaces for visitors and staff alike. The plan respects the current scale and height of the Frick, which comprises the original three-story house by Carrère and Hastings and John Russell Pope’s adjacent seven-story-high library building. Visitors approaching the Frick from Fifth Avenue or 71st Street will notice minimal changes to the exterior. From 70th Street, the back of the library building—which today is visible above the garden and is cluttered by a large, exterior metal fire escape—will be expanded slightly to recapture unused space in a rear service yard behind the garden and enhanced with a new limestone façade. This will create a finished, integrated appearance and complement the facades of the original Frick buildings.

Visitors will continue to enter the Frick through the original 1930s museum entrance on 70th Street and will move from the main entrance hall into a more open reception hall. Originally built in 1977, the reception hall is being reconfigured for better public circulation through the general admissions and information areas. From the reception hall, the public will now have the choice of three possible routes through the museum. On the main floor, they may proceed as usual from the reception hall into the Frick’s Garden Court and permanent collection galleries, which will remain unchanged. Alternatively, they may go directly to a newly created special exhibition area, including a large gallery and two smaller spaces. This new gallery will enable the Frick to continue offering the kind of acclaimed shows for which it is known without having to remove from view larger works from the permanent collection, as must be done currently.

The reception hall will also provide direct access to the second floor via a new bank of elevators or an elegant new staircase—a nod to the signature Grand Staircase in the Frick family’s original home, which will also be open to the public for the first time. On this newly created level above the reception hall (achieved by raising the height of this tall room by only five feet), the public will be able to enjoy a contemplative seating area with a view of the garden, the museum shop, and the institution’s first café. Visitors also will have access, for the first time in the institution’s history, to a suite of rooms on the second floor of the original Frick residence, which will be transformed into gallery spaces.

Formerly serving as the private living quarters of the Frick family before being converted into administrative offices in the 1930s, these historic rooms retain many of their elegant architectural details and decorative finishes, including fireplaces, mahogany paneling, a series of Edwardian chinoiserie painted ceilings, and the Central Park views so enjoyed by the Frick family. Of more intimate proportions than the grand main floor rooms of the original home, these newly created galleries will enable the Frick to better present some of its smaller paintings and drawings, and bring out of storage more of its growing holdings in the decorative arts.

The design also provides the Frick with purpose-built spaces for its public and educational programs, including a dedicated main-floor education center. Visiting school groups are among those who will benefit from this facility, which will include classroom and orientation spaces as well as a group entrance. The education spaces will provide a link and public passageway between The Frick Collection and Frick Art Reference Library, enabling visitors and students to move easily between the buildings for the first time without having to exit the institution. The Library will be enhanced with a new digital art history lab and new public space for research and programs. Additionally, a new 220-seat, state-of-the-art auditorium will be created underground, mostly by transforming existing multilevel basement areas currently being used for storage and old infrastructure under the 70th Street Garden.

ADA access will be upgraded throughout the Frick. These improvements include new ramps at the public entrances to the museum on 70th Street and to the library on 71st Street. Two new ADA-accessible elevators will provide access from the reception hall to the upper floors of the former home and to the auditorium, restrooms, and coat check below. Other key elements of the design include the renovation of core back-of-house facilities, including the addition of new conservation spaces for both museum and library collections. For the first time, the museum’s conservators, who currently use repurposed spaces in the historic home, will have up-to-date facilities added above what is now the music room and an art service elevator that will allow larger objects to be brought upstairs for treatment. Similarly, the conservation team of the library will have a modernized and far more efficient facility for their work, which is critical to the preservation of the library’s important holdings as well as the works of art on paper in the museum’s permanent collection. This facility will include a lab for the digitization of the library’s collections to make them more accessible to users onsite and globally.

The Frick will pursue LEED (Leadership in Energy and Environmental Design) certification for the project, which encompasses critical infrastructure and systems upgrades to the Frick’s aging buildings. The project will improve energy efficiency and overall sustainability, with the goal of safeguarding the institution and its collections for future generations.

ABOUT THE EVOLUTION OF THE FRICK’S BUILDINGS

Originally designed by Carrère and Hastings in 1914 as a private home for Henry Clay Frick, the structure has undergone several changes over the past century, most significantly during the 1930s when architect John Russell Pope undertook the conversion of the family home into a public museum. Pope’s expansion and additions nearly doubled the size of the original residence. As part of the 1930s project, Pope replaced a small building constructed in 1924 to house the art book collection of Mr. Frick’s daughter Helen Clay Frick with a seven-story-high library, today’s esteemed Frick Art Reference Library, which ranks among the world’s leading public art history research centers. In 1977, the Frick added to the museum two rooms with low ceilings at the basement level (which currently serve as small exhibition galleries), a reception hall to the east of the former residence, and the 70th Street Garden. The Portico Gallery was added in 2011 by enclosing an existing loggia in the Fifth Avenue Garden. The Frick is an individually designated New York City landmark and is located in the Upper East Side Historic District. The new design will require approval of the New York City Landmarks Preservation Commission as well as the New York City Board of Standards and Appeals.