The Promise of Habitat ’67: Major Milestones for Safdie Architects’ Residential Projects in Asia and Latin America

More than 50 years after Habitat ’67 presented a new vision for urban living, Altair Residences completes in Colombo; Qorner Tower tops out in Quito; and Phase II of Habitat Qinhuangdao launches

Altair Residences (Colombo, Sri Lanka), Qorner Tower (Quito, Ecuador) and Habitat Qinhuangdao (China) represent the realization of more than 50 years of study on how to improve urban living. Embodying the ideals and foundational principles of Habitat ’67 – that architecture should be profoundly humane and connected to nature – the projects are designed to maximize daylight, natural air, privacy, and communal space. While incorporating dramatic stepped profiles, private landscaped terraces, and public garden amenities at multiple levels, each bespoke response reflects their respective site, geography, climate, and culture.

“Over the past year there has been a rediscovery of the interdependence between nature and society. We have seen an outcry for our basic human needs to be met – access to daylight, outdoor space, connection to nature, and the ritual of public life at all scales. After a year in relative isolation from one another, and the urban habitat at-large, the ideals of Habitat ’67 have become ever more relevant as we reimagine the urban landscape.”
— Moshe Safdie 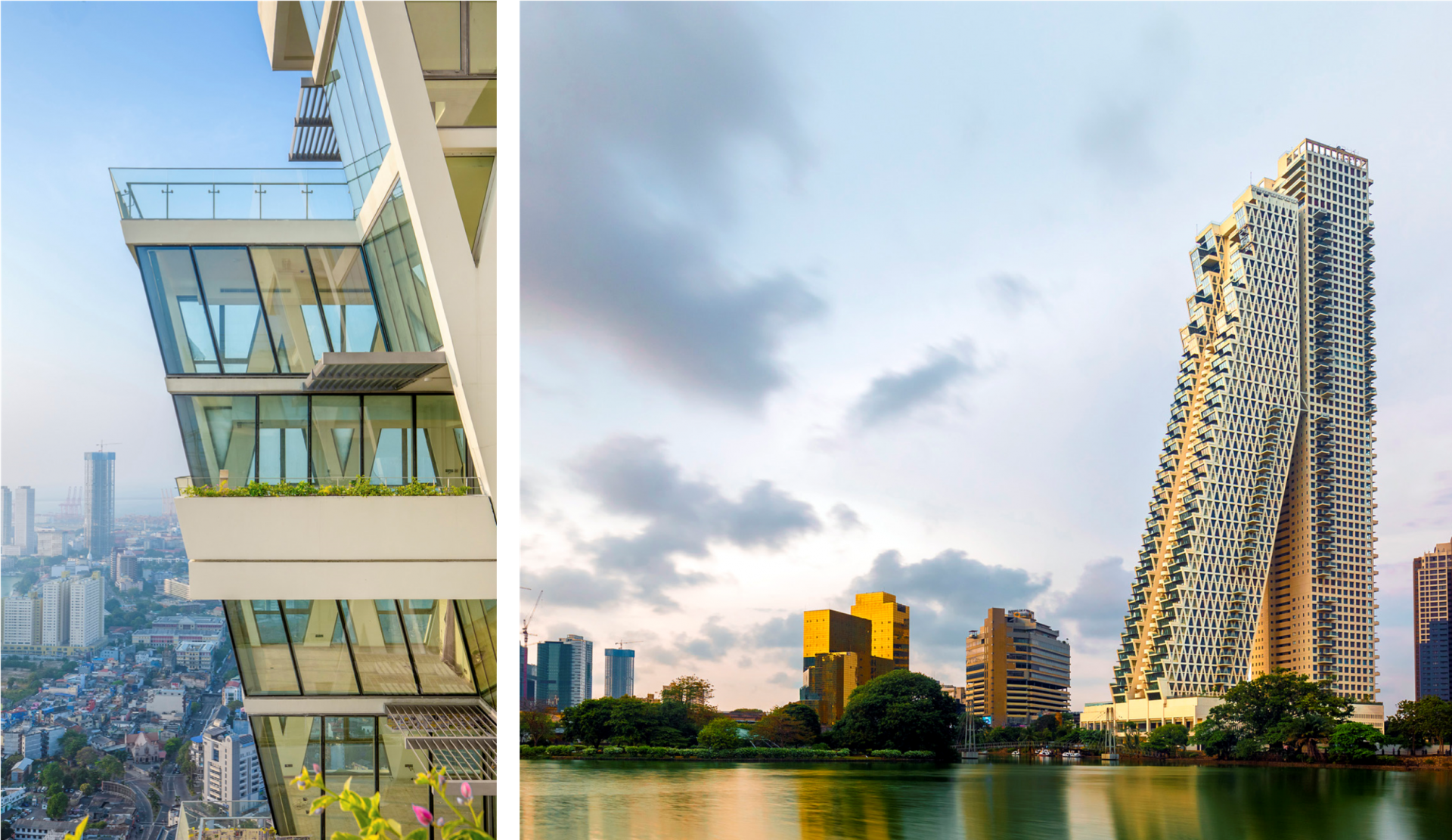 Designed with the needs of a tropical home in mind, Altair’s pair of towers – one leaning upon the other – provides each unit with cross ventilation, balanced diffusion of sunlight and unparalleled views of Beira Lake, the Indian Ocean, and the surrounding city.

The 400-unit residential complex takes full advantage of the site with an innovative two-leg structural design comprising two tower blocks of 63 and 69 stories. The staggered and stepped formation of the leaning towers creates a cascade of large garden terraces facing Beira Lake at each level. The diagrid structure, chosen for its efficiency in dealing with the forces of the inclined tower, allows for a permeable façade with large windows and openings, access to balconies, and units that feature individual roof gardens or terraces.

Both towers are planned with through-unit, column-free interiors featuring open plans that maximize the efficiency of the spaces.

Expansive community gardens and shared outdoor spaces are strategically placed within the building, with a communal sky garden crowning the shorter tower at the 63rd floor. The complex will contribute to the public life of the city by offering more than 56,000 square meters (600,000 square feet) of public space including a retail arcade and a waterfront promenade on the ground level, with additional retail spaces overlooking Beira Lake on the mezzanine level.

At 240 meters at its highest point, Altair will be the island nation’s tallest residential building and the first skyscraper to be completed in the rapidly developing city of Colombo. The building opens in September 2021. 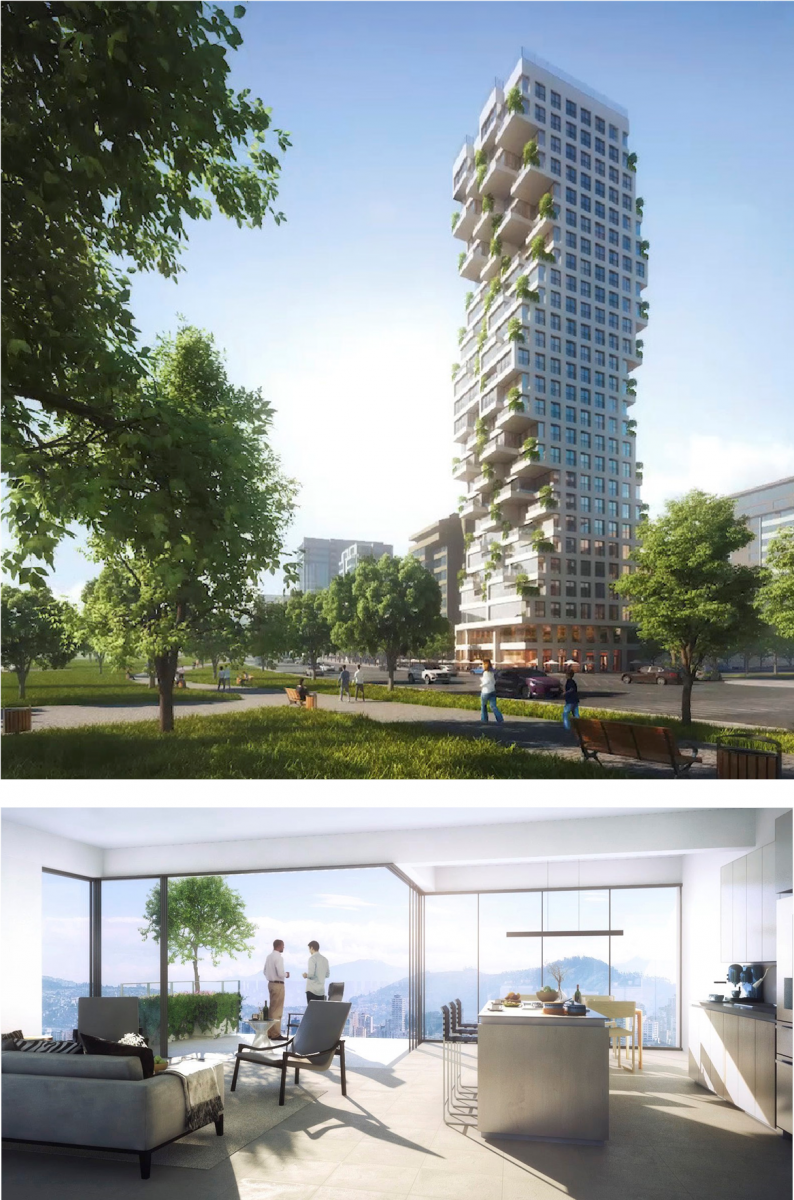 Overlooking Quito’s La Carolina Park, the 24-story Qorner Tower maximizes the potential of a small site. The building profile steps back to reveal a “hill side” of terraces and steps forward to create a “cliff face”. As the building steps in and out, generous double-height landscaped terraces are created on each level, with natural shading provided by the protruding terraces above. Operable glass walls open directly onto the landscaped terraces, providing multidirectional views of the park and surrounding mountainous
landscape. Creating a dramatic profile within the city’s skyline, Qorner merges indoor and outdoor living to take full advantage of Quito’s year-round temperate weather.

In contrast to the stepping façades on the east and west faces of the tower, the north and south structural walls remain vertical. Walls are punctuated by large square windows with sliding glass doors and “Juliet” railings, providing natural cross-ventilation in all units. In response to the seismic conditions of Quito, the project’s structure is designed around a perimeter concrete frame stabilized by a robust shear-wall concrete core. There are no internal columns in the apartments, which allows for greater interior planning flexibility and units that easily combine.

At the base, the tower is set back from the street creating a generous landscaped sidewalk, with retail and restaurants opening to the surrounding streets. The roof offers a treelined infinity-edge swimming pool, garden, and gathering space for the residents. A dramatic vertical living wall of native planting extending the full height of the north facade.

Topping out in September, the project is targeted for completion in early 2022.

Set between the urban density of the city and the coastline of the Bohai Sea, Habitat Qinhuangdao is organized into a series of linked residential blocks along the shore. Conceived to accommodate increased density, stepped and staggered buildings provide units with private terraces, balconies, and solariums. Porous residential blocks of 16 stories each are designed to create large “urban windows” that frame views to the sea, provide spaces for community, and offer a sense of openness.

Enhancing and extending the garden environment at the base of the Phase I towers, four ground level gardens -- each an interpretation of Qinhuangdao’s natural landscape -- will offer distinct experiences for the residents. Interactive children’s playgrounds, a landscaped amphitheater, planted promenades and a system of ponds, fountains and streams are deployed across the development. Additional communal gardens and pool areas are created at the upper levels of the buildings and atop the link bridges, which connect the
terraced buildings.

“In Kerry Properties we had an ambitious client who saw how our design philosophy would resonate with the local culture and context,” said Sean Scensor, Partner-in-Charge of the project for Safdie Architects, “When you stagger and offset units from one another, stepping the buildings away from the sea, you create beautiful terraces that make each unit feel like a penthouse. It takes care to resolve, but the result is the amazing feeling of living in the sky.”

Adding 1,000 units distributed across two, 30-story terraced buildings, Phase II doubles the initial development which opened in 2017, completing the original residential concept for the project. Future phases of the development, consisting of a pair of residential towers and a retail complex, are currently in design. Construction commenced in July of 2021, with completion targeted for 2024.

To celebrate the start of Phase II, Kerry Properties commissioned the film “Habitat in Nature.” The film is an investigation into how the initial ideas of Habitat ’67 have evolved and adapted to inform and inspire Habitat Qinhuangdao. Through firsthand interviews with residents of both Habitat ’67 in Montreal and Habitat Qinhuangdao in China, the film accents the lasting impact the Habitat model has on the built environment and on the lives of its inhabitants.

THE EVOLUTION OF HABITAT:

At the 1967 World Expo in Montreal, themed “Man and His World,” Habitat ’67 sought to transform urban housing and elevate the standard of apartment living, particularly the sector of mass-produced affordable housing in the city. It was a response to both suburban developments, which squandered land and dispersed communities, and urban housing, which lacked privacy, gardens, and a connection to nature.

The philosophy of Habitat is rooted in Moshe Safdie’s essential dictum: “For Everyone a Garden,” a metaphor for making an apartment in a high-rise structure into what connotes “house” — a dwelling with its own identity, openness in a variety of orientations, and adjacent personal outdoor space within a community.

In 2010, Safdie Architects examined the essential drivers behind Habitat as part of an independent year-long research fellowship dubbed “Habitat of the Future.” The conceptual foundation of this investigation resulted in new projects of varying scales across the globe. While design principles have evolved to respond to the
culture, context and site of every project, the core of every Habitat is consistent—to further investigate and develop humane, communal, urban living.

“Moshe has held steadfast with his thesis for over 50 years, that designing to improve our quality of life must be a priority for the profession. We are now seeing many of the ideas, once held as mere utopian dreams, becoming a reality. Habitat’s legacy has so much more potential yet to explore.”
— Jaron Lubin, Design Partner

The Promise of Habitat ’67: Major Milestones for Safdie Architects’ Residential Projects in Asia and Latin America