The project Interspecies Assembly by artist group SUPERFLEX for ART 2030 opens during the United Nations General Assembly, seeking to draw attention to biodiversity and the critical role of the ocean—particularly to the region known as the twilight zone—to the global climate.

Interspecies Assembly will feature two public works: a nightly projection of the filmwork Vertical Migration onto the façade of the United Nations’ signature glass and marble tower in New York, and the sculptural installation Interspecies Assembly in Central Park’s Naumburg Bandshell.

The project Interspecies Assembly by SUPERFLEX for ART 2030 brings together leading partners from art, science, and policy, including TBA21—Academy, The United Nations, Woods Hole Oceanographic Institution, and Google Arts & Culture. 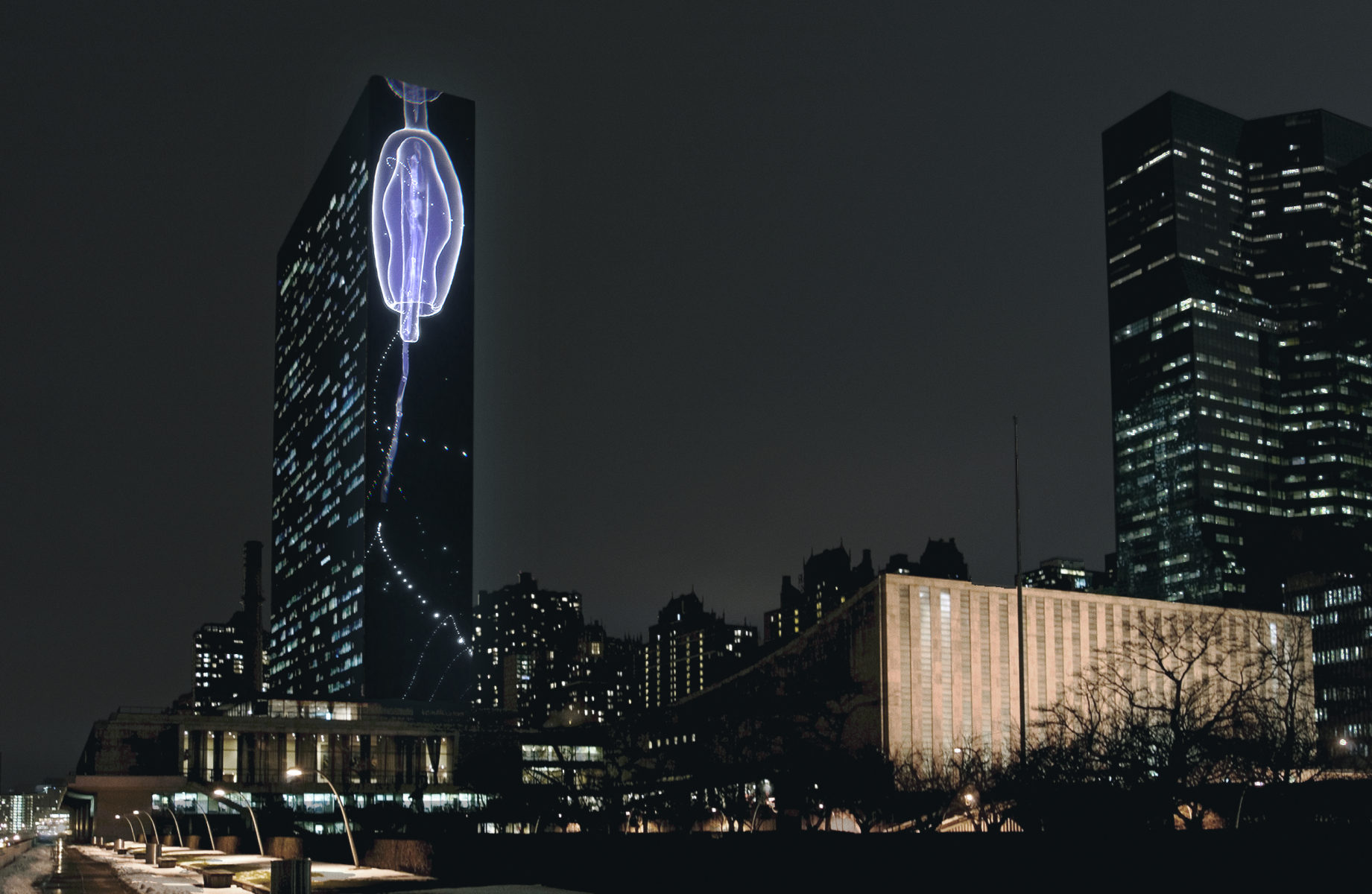 Biodiversity is collapsing, sea levels are rising, marine life is threatened, and the weather is becoming more extreme. Human activity, as reported by the Intergovernmental Panel on Climate Change (IPCC), is now unequivocally linked to climate change. In the face of this crisis, the artist group SUPERFLEX has created the project Interspecies Assembly, comprised of a film and a sculptural installation that will be shared with the public from September 21st to 24th, coinciding with the UN’s General Debate.

Interspecies Assembly emerges from SUPERFLEX's in-depth research into the deep sea, climate, and biodiversity. The project will feature two artworks: a projection of the video Vertical Migration onto the United Nations Secretariat Building, and the participatory installation Interspecies Assembly near Central Park’s Naumburg Bandshell. This project has been commissioned by ART 2030, a non-profit organization uniting art with the United Nations 2030 Agenda for Sustainable Development and its 17 Sustainable Development Goals, and supported by TBA21—Academy, the leading art organization dedicated to ocean advocacy.

Vertical Migration is a dramatic, 505-foot (154-meter) video installation that draws attention to the role that the ocean plays in sustaining the world’s biodiversity and climate. From 8-11 pm EST every night from September 21st to 24th, a representative from the animal world will travel up from the deep sea to visit the UN. The filmwork will cover the entire north-facing marble façade of the United Nations signature 39-story tower, inviting humans to meet one of the many species we share our planet with.

Vertical Migration focuses on a siphonophore: a symbol of the many working as one. A siphonophore is not a single animal but a colony of specialized marine organisms that work together to enhance group survival. These amazing colonies can grow to immense sizes: some longer than the largest blue whale. This particular siphonophore is a creature of the ocean twilight zone, the “mesopelagic” or midwater region just below the ocean’s sunlit surface zone. This global swath of water extends hundreds of meters into the deep and plays a critical role in the ocean’s web of life.

Vertical Migration is commissioned by ART 2030 and TBA21–Academy, and is supported by Avatar Alliance Foundation, Dalio Philanthropies and OceanX, in partnership with Woods Hole Oceanographic Institution (WHOI), New Carlsberg Foundation, The Obel Family Foundation, Beckett Fonden, and Danish Arts Foundation. WHOI and its partners are investigating the role of the twilight zone in the ocean’s biological carbon pump: a massive, planet-scale process that captures carbon dioxide from the atmosphere and moves it down to the deep ocean, keeping it out of the atmosphere for hundreds or even thousands of years.

The sculptural installation Interspecies Assembly will be a physical gathering site to nurture dialogue between species. It will be situated under the protected Elm trees by Central Parks’s Naumburg Bandshell. Manhattan’s largest green space is also home to an array of flora and fauna: turtles, ducks, chipmunks, fish, as well as over 230 species of birds and many thousands of trees. Open to the public from September 21st-24th, a series of pink marble sculptures will demarcate a space in which humans must temporarily slow down and actively listen to their co- species.

The architecture of the artwork arises from SUPERFLEX’s ongoing investigation into interspecies living. Exploring the shift towards a more symbiotic relationship with other species, the gathering site responds to sea-level rise across our planet. The pink coral sculptures incorporate the textures, colors, and forms that will best support a thriving and biodiverse aquatic life in a possible underwater future, while the arrangement of the sculptures in a broken circle evokes the feeling of circularity without the comforting completeness of a ring, implying the need for both consensus and disagreement. The Interspecies Assembly is a porous meeting place where visitors of all species can enter and exit from any direction.

“Our agreements and demonstrations are proving insufficient; the water is coming. Eels are vanishing, corals reefs are under severe heat stress, sheep laurel bloom earlier and mackerel and flamingos are moving north. All species are suffering from human-made climate change, but their needs and wishes are still to be accounted for.” – SUPERFLEX

“Engagement with planetary challenges such as biodiversity loss goes beyond a scientific understanding of the phenomena; it requires the cultivation of care and an emotional connection. Great art can make us feel and connect to these complex issues: it can be the agency of change. Great art can affect the course of history for all lives. And the time is now.” – Luise Faurschou, Founder and Director of ART 2030

“Interspecies Assembly reminds us of our inherent responsibility to protect the planet and its rich biodiversity. It is a symbolic interpretation of nature’s message to world leaders that the decisions they make must reflect that responsibility. We all share this planet, and we have to learn to live in harmony and peace with each other and with nature.” - Melissa Fleming, Under-Secretary-General for Global Communications, United Nations

“Vertical Migration isn’t just another artwork inspired by human fascination with the ocean and the urge to explore it. It represents an expression of hope in the face of the climate crisis— created not by people, but by nature itself. By bringing this monumental SUPERFLEX piece to the iconic UN building during Climate Week NYC, we are demonstrating how artists and scientists can work together to spark awe and imagination as well as bringing greater awareness and conversation to trigger necessary collective action around urgent climate issues.” – Markus Reymann, co-founder and director of TBA21–Academy

“With the world waking up to the clear and present threat of climate change, people are looking to the ocean for solutions, especially solutions to the problem of carbon dioxide in the atmosphere. The ocean has tremendous potential for carbon storage. But at what cost? If we want to avoid the destruction of ocean ecosystems and the unknown consequences of ecosystem changes, we need to shine a light in the deep and learn the value of what’s there. Science and art together shine this light in an especially important way.” – Peter de Menocal, WHOI President and Director

Experience it online! A digital exhibition developed in collaboration with Google Arts & Culture— bringing together contributions from partner institutions and experts on oceans, biodiversity, climate change, and more—is launching alongside the opening of Interspecies Assembly: g.co/siphonophore

Use your phone to bring an Augmented Reality siphonophore — the central figure of Vertical Migration— into your living room, learn about what makes this creature so special and about the importance of biodiversity, alongside the story of the work’s artistic development. Furthermore, don’t miss a behind-the-scenes look at the creation of the Interspecies Assembly sculpture and a recorded conversation between Professor Carsten Rahbek (GLOBE Institute, University of Copenhagen) and SUPERFLEX. The collaboration provides a wealth of educational resources and explorations into the topics of biodiversity thanks to contributions from Google Arts & Culture partners, including: Monterey Bay Aquarium Research Institute, Smithsonian National Museum of Natural History, Smithsonian Libraries and Archives, Underwater Earth, Berenice Pauahi Bishop Museum, The United Nations, and Museum für Naturkunde Berlin.

The collaboration launches on 17 September 2021 at g.co/siphonophore

The Interspecies Assembly project was developed in close collaboration with Kollision and KWY.studio.

With thanks to the United Nations Department of Global Communications and the Consulate General of Denmark in New York.