The Veterans Room By Louis Comfort Tiffany and Associated Artists, Reopens to the Public After Yearlong Restoration

ONE OF AMERICA’S MOST IMPORTANT INTERIORS, THE VETERANS ROOM BY LOUIS COMFORT TIFFANY AND ASSOCIATED ARTISTS, REOPENS TO THE PUBLIC AFTER YEARLONG RESTORATION

As Part of Herzog & de Meuron’s Reimagining of the Historic Park Avenue Armory, Seminal Room is Transformed into an Intimate and Eclectic Cultural Salon for Public Enjoyment 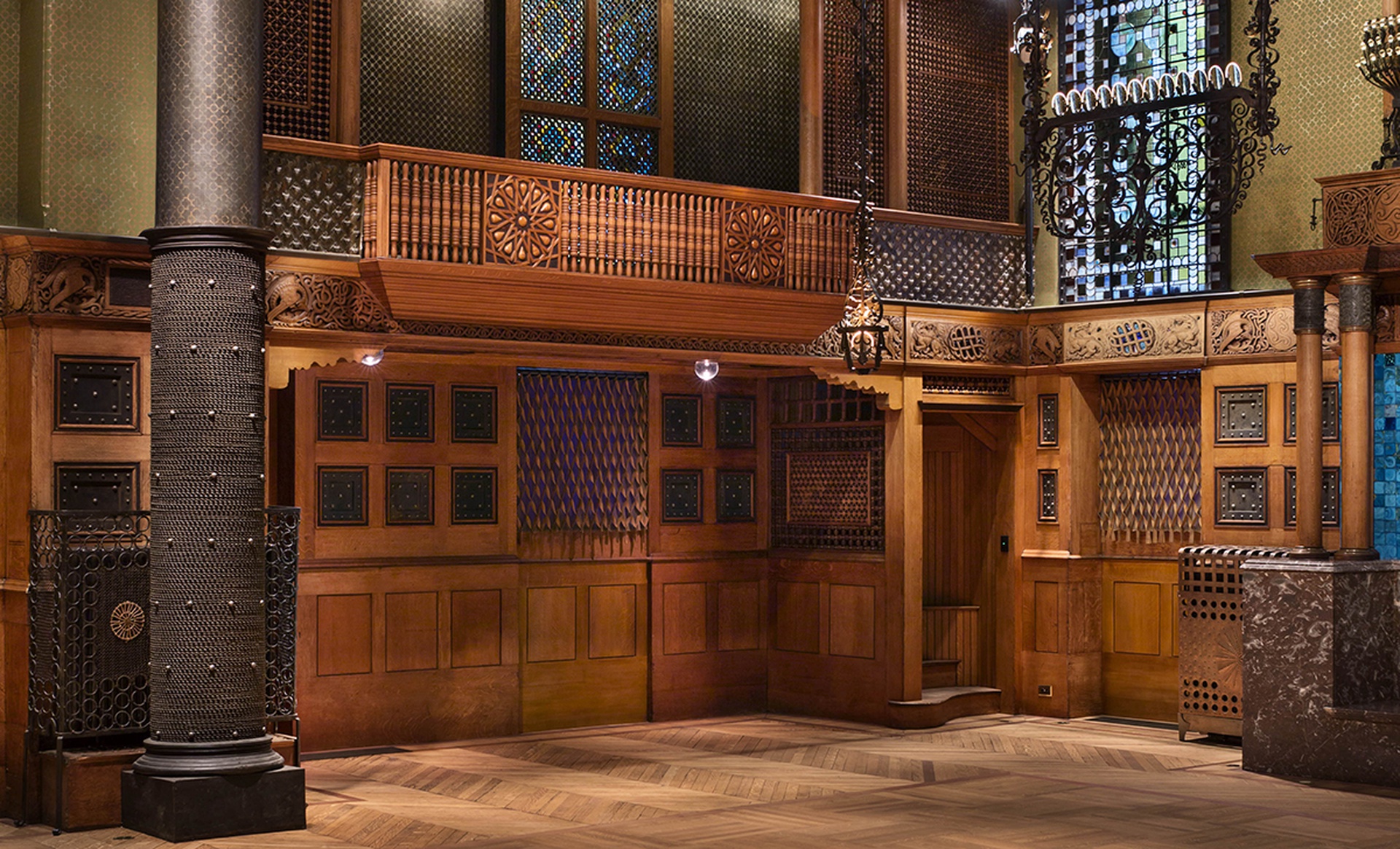 ONE OF AMERICA’S MOST IMPORTANT INTERIORS, THE VETERANS ROOM BY LOUIS COMFORT TIFFANY AND ASSOCIATED ARTISTS, REOPENS TO THE PUBLIC AFTER YEARLONG RESTORATION

As Part of Herzog & de Meuron’s Reimagining of the Historic Park Avenue Armory, Seminal Room is Transformed into an Intimate and Eclectic Cultural Salon for Public Enjoyment

As part of the ongoing transformation of its historic building into a cultural institution dedicated to cutting-edge unconventional arts productions, Park Avenue Armory is reopening its restored Veterans Room, the most significant remaining intact interior in the world by Louis C. Tiffany and Co., Associated Artists. A monument of late 19th-century decorative arts, the Veterans Room is being reanimated through interventions by Herzog & de Meuron with Platt Byard Dovell White Architects, which will transform the space into a state-of-the-art room for intimate and eclectic cultural programming. The room opens today with performances by jazz pianist, composer, and MacArthur Fellow Jason Moran as part of the Artists Studio series, featuring innovative artists and artistic pairings that harken back to the imaginative collaborations of the designers who originally conceived the room.

“We are thrilled to be reopening the Veterans Room, an opulent room among the most significant surviving interiors of the American Aesthetic Movement that resulted from the collaborative work of artists led by a young, visionary Louis Comfort Tiffany,” said Armory President and Executive Producer Rebecca Robertson. “Our revitalization of this room responds to the original exuberant vision for the room’s design, bringing into dialogue some of the most talented designers of the 19th and 21st centuries—Associated Artists with Herzog & de Meuron and a team of world-renowned artisans and experts in Tiffany glass, fine woodworking, and decorative arts.”

The Veterans Room was an important civic commission awarded in 1879 to Louis Comfort Tiffany, Associated Artists, a newly formed collective that included three of the most significant American designers of the 19th century at early stages of their very distinguished careers: Louis Comfort Tiffany, Stanford White, and Candace Wheeler. According to an 1881 issue of Scribner’s, the responsibilities for the room were divided as follows:

The design of the room by these artisans was exotic, eclectic, and full of experimentation; as noted by Decorator and Furnisher: “the prepondering styles appear to be the Greek, Moresque and Celtic, with a dash of Egyptian, the Persian and the Japanese in the appropriate places.” When the Veterans Room opened in 1881, The New York Times called it “unique in its appointments and decorations and undoubtedly the most magnificent apartment of the kind in this country.” Its reputation did not diminish with time. When the room was designated as an interior landmark by the New York City Landmarks Commission in 1992, the Landmarks Report stated the Veterans Room and the adjacent smaller Library were “widely considered to be among the most significant and beautiful interiors of the American Aesthetic Movement.”

Though they only worked together for four years, Associated Artists would go on to design some of the most prestigious commissions of the time, including the Mark Twain House (1881), five rooms in the White House (1882), and the Cornelius Vanderbilt House (1883). While the Armory’s Board of Officers Room—which was restored in 2013—showcases the mature artistic style of Herter Brothers, the Veterans Room represents the exuberance and innovation of the younger Associated Artists, who approached the project with a new and distinctly American vision, highlighting their affinity and passion for the complexity and interplay of materials to break new ground in modern interior design.

Since the early 20th century, the Veterans Room has suffered from several low-quality alterations and restorations, causing some of the original material to be lost, though the major architectural features of the room were maintained. Its initial opulent appearance had much greater variety in color and delicacy in painted decoration as well as a profusion of carefully selected artworks, artifacts, and textiles. Fortunately, unlike other historical rooms in the Armory, such as the Board of Officers Room, there was little environmental damage, and the room still has its original wood and metalwork, gas light fixtures, glass, and some art objects. Where the original finishes are missing, they are generally well-documented.

The revitalization of the Veterans Room follows Herzog & de Meuron’s design approach for the Armory building, which seeks to highlight the distinct qualities and existing character of each individual room while interweaving contemporary elements to improve its function. Even more so than in other rooms at the Armory, Herzog & de Meuron’s approach to the Veterans Room is to amplify the beauty of the room’s original vision by adding contemporary reconstructions of lost historic material and subtle additions with the same ethos and creative passion as the original artisans to infuse a modern energy into a harmonious, holistic design.

In addition to installing advancements in infrastructure and acoustics, the design team created new wallpaper, using both modern and original techniques that mirror the intent, color balance, and multi-stepped process of the design by Tiffany, Colman, and Wheeler. In addition, the team focused on a number of significant upgrades to the room’s lighting, including new systems for architectural lighting. They developed LED-illuminated glass lenses to replace the gas jets in the original fixtures, creating the glow and subtlety that the original designers sought to achieve, and added curtains composed of layers of copper mesh, leather strapping, and deep blue velvet for the lower windows, replacing the lost textiles by Wheeler.

The scope of work also included the removal of wall coverings, paint, varnish, and the over-floor that were added in the late 20th century; refinishing and repair of the original oak and mahogany floor; repair and refinishing of the original woodwork and metal work; the repair or replacement of broken and damaged decorative elements; the re-shoring and re-structuring of the mantelpiece; and the cleaning and restoration of artwork, including a monumental frieze by Millet and Yewell and decorative glass by Tiffany. The original decorative surfaces, including the ceiling, were de-layered of overpaints to reveal their original colors and design and then protected. The original benches were cleaned and repaired and new leather cushions were made. The room was soundproofed and engineered acoustically and heating, air conditioning, and power systems were discreetly installed to allow a diverse array of cultural events to be hosted in the space, ranging from performances and exhibitions to educational workshops and lectures.

The Veterans Room By Louis Comfort Tiffany and Associated Artists, Reopens to the Public After Yearlong Restoration