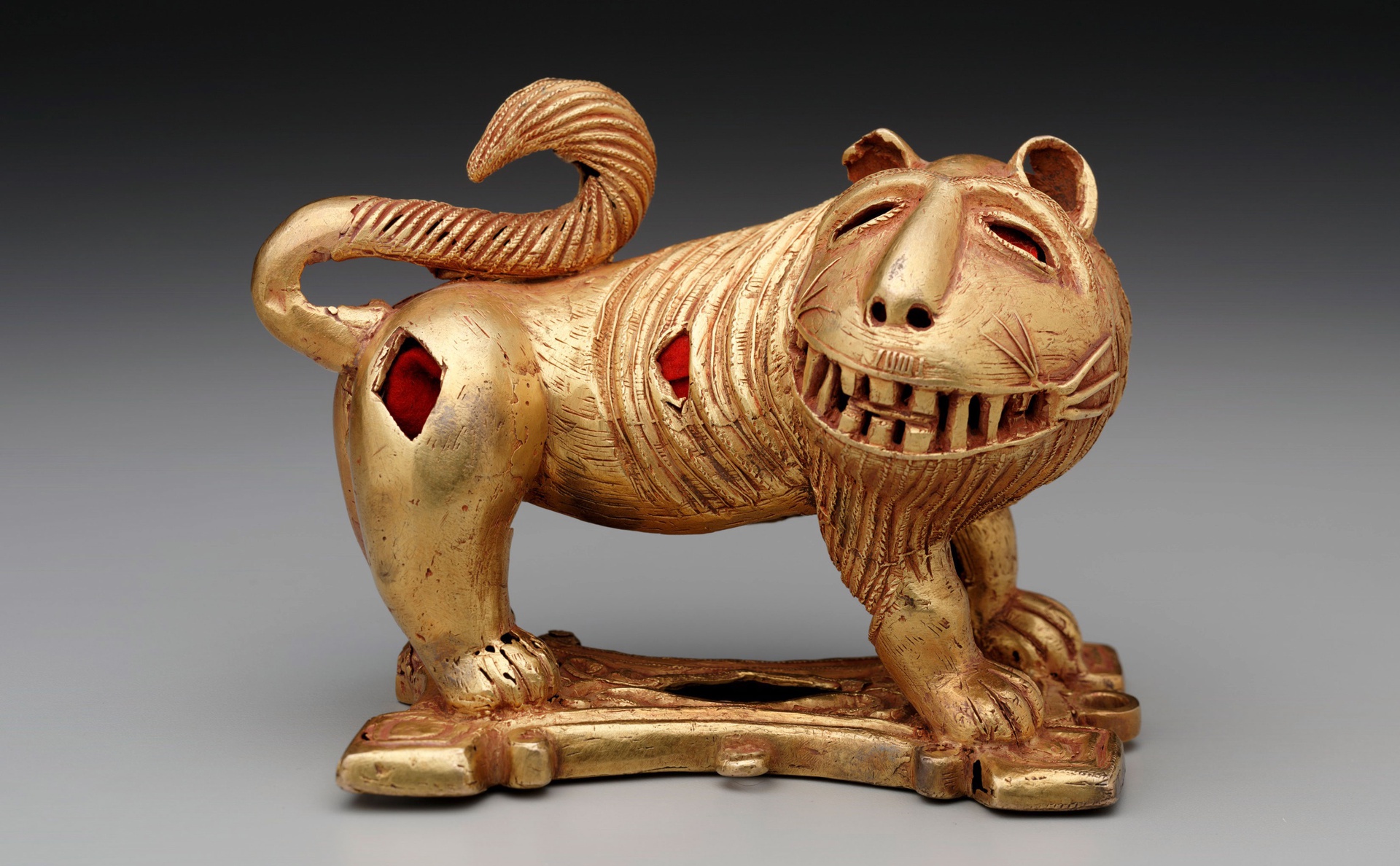 This April, the Dallas Museum of Art (DMA) presents an exhibition dedicated to the royal regalia of the Asante kingdom. Spanning three centuries, The Power of Gold: Asante Royal Regalia from Ghana brings together over 250 objects, including crowns, sword ornaments, ceremonial furniture, textiles, pectoral disks, weapons, a state umbrella, musical instruments, and jewelry made of wood, silk, brass, iron, and gold. Organized by the DMA and inspired by the Museum’s collection, The Power of Gold is the first American museum exhibition dedicated to Asante regalia in over 30 years, and explores the unique role and impact of gold on the development of Asante society, economy, and arts. The exhibition is co-presented by Texas Instruments and PNC Bank.

“The DMA’s African art collection has grown tremendously in the past decade, and we are thrilled to shed new light on these exquisite objects, and on the history and culture of the Asante people, some of whom reside in our local community,” said the DMA’s Eugene McDermott Director Agustín Arteaga. “We look forward to welcoming audiences to experience this fascinating culture through the range of skill, symbolism, and tradition infused in this incredible array of royal regalia.”

On view from April 15 through August 12, 2018, the exhibition is curated by Dr. Roslyn A. Walker, the DMA’s Senior Curator of the Arts of Africa, the Americas, and the Pacific, and The Margaret McDermott Curator of African Art. The Power of Gold provides insight on the Asante (also spelled Ashanti), the largest and most prominent group of related Akan (Twi-speaking) peoples in southern Ghana, and the capital at Kumasi, which is adjacent to the Ivory Coast. Founded around 1701 with wealth derived primarily from the gold trade with North Africa and Europe, the Asante kingdom expanded through military conquest to become a powerful and dazzling polity in West Africa.

The DMA’s collection of Asante regalia, which is the inspiration for the exhibition, includes a cast gold state sword ornament in the form of a standing lion, an iron state sword with an elaborate handle, a gold-leafed linguist’s (or spokesman’s) staff, an intricately cast gold T-shaped bead, and a large cast gold spider. The bead and the spider ornament were owned by Asantehene (King) Kwaku Dua II (who reigned briefly in 1884) and were acquired from a Texas private collection.

The Power of Gold explores the aesthetics and cultural significance of Asante royal regalia, much of which is made of or adorned with gold.The exhibition progresses through the following themes:

“While gold was a key driver of the Asante economy, it also became an incredibly important part of Asante culture,” said Walker. “Using sophisticated techniques, the Asante incorporated gold across many different areas of their lives, but most significantly in royal regalia and ceremonial objects. Through this exhibition, we hope to bring renewed attention to the Asante and deepen public appreciation and understanding of their history, culture, and aesthetics.”

“Texas Instruments is honored to be a presenting sponsor of The Power of Gold, continuing a more than 50-year partnership our organization has had with the DMA,” said Andy Smith, Executive Director of the TI Foundation and Director of Corporate Philanthropy. “TI supports the arts to help improve the quality of life in our North Texas community and to contribute to the thriving arts and culture scene.”

“PNC has a 160-year tradition of enriching our communities through philanthropic support of the arts,” said Brendan McGuire, Regional President & Head of Corporate Banking for PNC. “This work is critical to ensure Dallas remains a vibrant city in which to live, work, and play given the economic benefits of an active arts community. We look forward to supporting the Dallas Museum of Art as they continue to attract globally significant exhibitions like The Power of Gold to our city.”

The Museum will celebrate The Power of Gold during the April Late Night on Friday, April 20, from 6:00 p.m. until midnight with an evening of programs inspired by the exhibition, including a talk led by Dr. Walker on the craftsmanship and context of Asante royal regalia at 7:00 p.m. Additional programs, including gallery talks, lectures, films, and programming for families, teens, and teachers will be scheduled throughout the run of the exhibition. For dates, prices, and details, visit DMA.org.

The Power of Gold: Asante Royal Regalia from Ghana is organized by the Dallas Museum of Art. The exhibition is co-presented by Texas Instruments and PNC Bank. Educational programming is underwritten by Kosmos Energy. Marketing support is provided by the Dallas Tourism Public Improvement District, Dallas Weekly, and AIM Media Texas & Digital AIM Media.

The Dallas Museum of Art is supported, in part, by the generosity of DMA Members and donors, the citizen of Dallas through the City of Dallas Office of Cultural Affairs, and the Texas Commission on the Arts. The Power of Gold: Asante Royal Regalia from Ghana requires a special exhibition ticket of $16 for adults, with discounts for students, military personnel, and seniors; DMA Members and children 11 and under are free.

Established in 1903, the Dallas Museum of Art (DMA) is among the 10 largest art museums in the country and is distinguished by its commitment to research, innovation, and public engagement. At the heart of the Museum and its programs is its global collection, which encompasses more than 24,000 works and spans 5,000 years of history, representing a full range of world cultures. Located in the nation’s largest arts district, the Museum acts as a catalyst for community creativity, engaging people of all ages and backgrounds with a diverse spectrum of programming, from exhibitions and lectures to concerts, literary events, and dramatic and dance presentations. Since the Museum’s return to free general admission in 2013, the DMA has welcomed more than 3.2 million visitors. For more information, visit DMA.org. The Dallas Museum of Art is supported, in part, by the generosity of DMA Members and donors, the citizens of Dallas through the City of Dallas Office of Cultural Affairs, and the Texas Commission on the Arts.