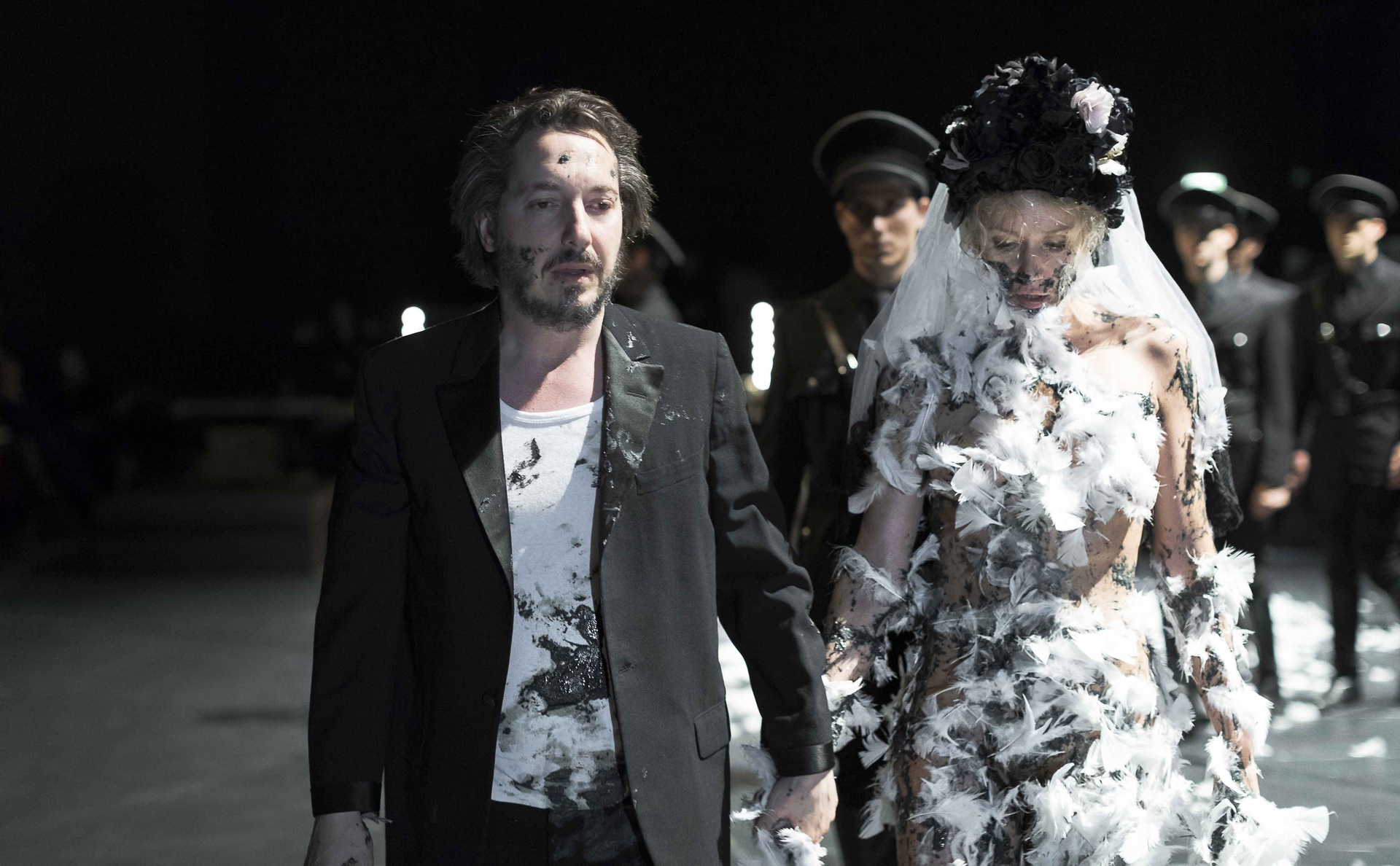 This July, Park Avenue Armory presents the North American premiere of two-time Tony- and Olivier Award-winning stage director Ivo van Hove’s The Damned. Starring the venerated French troupe Comédie-Française—founded in 1680, it’s the oldest national theater company in the world—in their first New York appearance in over a decade, the production will permeate the Armory’s historic Wade Thompson Drill Hall with a tale of moral corruption, militaristic machinations, and a satirical celebration of evil. Emblematic of van Hove’s artistic aesthetic, The Damned is a theatrical staging of Luchino Visconti’s eponymous 1969 screenplay.

A chilling and topical rumination on political depravity, The Damned portrays the manipulations of the von Essenbeck family during the rise of Nazi Germany. The Armory’s vast industrial space will provide a powerful backdrop, and context, for this unsettling story that personifies the perils of alluring ideology and wanton greed during a time of political upheaval. Performances at the Armory will begin July 17, 2018, and run through July 28.

“We are excited to welcome Ivo van Hove to the Armory with the production he created with Comédie-Française and to help realize this production, grandiose in both its physical and emotional scale,” said Rebecca Robertson, Park Avenue Armory’s President and Executive Producer. “As we approach the 50th anniversary of the film’s premiere, it’s sobering how relevant these themes are today.”

“One can’t help but have admiration for the way that Ivo van Hove and his work has redefined conventional theater,” said Pierre Audi, Artistic Director at the Armory. “Blending the modern and the technological with the foundational principles of Shakespeare and the Greeks tragedies, van Hove’s every choice has impeccable intentionality. For instance, the incredible use of videography and projections play with scale, juxtaposing vast space with intimacy, an element that will play particularly well in the spacious Drill Hall.”

Set in 1933, The Damned follows the vacillating fate of the von Essenbecks, a wealthy society family with ties to the lucrative steel dynasty. When the family’s patriarch, Baron Joachim von Essenbeck, is murdered, the steel-and-munitions works is seized by the relative next in line: the corrupt SA officer, Konstantin von Essenbeck. As the reins of power are sought by all within reach, the steel empire ultimately falls into the hands of the Nazi government, designating a direct path to war. What emerges is a multifaceted dramatization of debauchery that depicts the inevitable sociopolitical complexities of dictatorial regimes.

Comédie-Française originally produced and conceived The Damned, which went on to premiere at the Avignon Festival in 2016, followed by a four-month run at its storied Paris theater. For the production, Jan Versweyveld—van Hove’s longtime collaborator—developed a scenic design that borders on installation art, creating a sparse space where all objects have a precise and ritualistic function. The Armory’s historic walls of the Drill Hall will serve as a significant part of the scenic design. The primary playing space is a central floor with an LED screen backdrop that displays live projections from the show, recorded videos, as well as historical and archival images. As part of the mise en scène, Versweyveld exposes dressing rooms, costume racks, and bleachers for inactive performers on the stage periphery, amplifying the raw, naked, and instrumental ethos of both the subject matter and production elements.

As part of the Armory’s Artist Talk Series, the production on Thursday, July 19 will be preceded by a separately ticketed conversation between Ivo van Hove and visual artist and vocalist Laurie Anderson. The conversation series seeks to encourage active discussion on the creative process and development of this landmark work.

The Damned is part of Park Avenue Armory’s 2018 season that continues with North American premiere of The Six Brandenburg Concertos, the North American premiere of a dance work by choreographer Anne Teresa De Keersmaeker (Oct. 1–7), and William Kentridge’s The Head and the Load (Dec. 4–15), an Armory commission that will activate the full expanse of the Wade Thompson Drill Hall with processional musical theater performance that sheds light on the story of the more than two million Africans that served in the First World War.

Previous theatrical presentations at the Armory include Simon Stone’s critically acclaimed Yerma, starring Billie Piper in her North American debut; eight-time Drama Desk-nominated play The Hairy Ape, directed by Richard Jones and starring Bobby Cannavale; A Room in India (Une chambre en Inde) and Les Éphémères with Le Théâtre du Soleil under the direction of Arian Mnouchkine; the Chekhov International Theatre Festival’s staging of Boris Godunov; the unprecedented residency of the Royal Shakespeare Company in performances of five productions in repertory over six weeks; and the Armory’s production of Macbeth, directed by Rob Ashford and Kenneth Branagh in a staging that transformed the Drill Hall into a Scottish heath and henge and drew audiences into the blood, sweat, and elements of nature as action unfurled across a traverse stage.