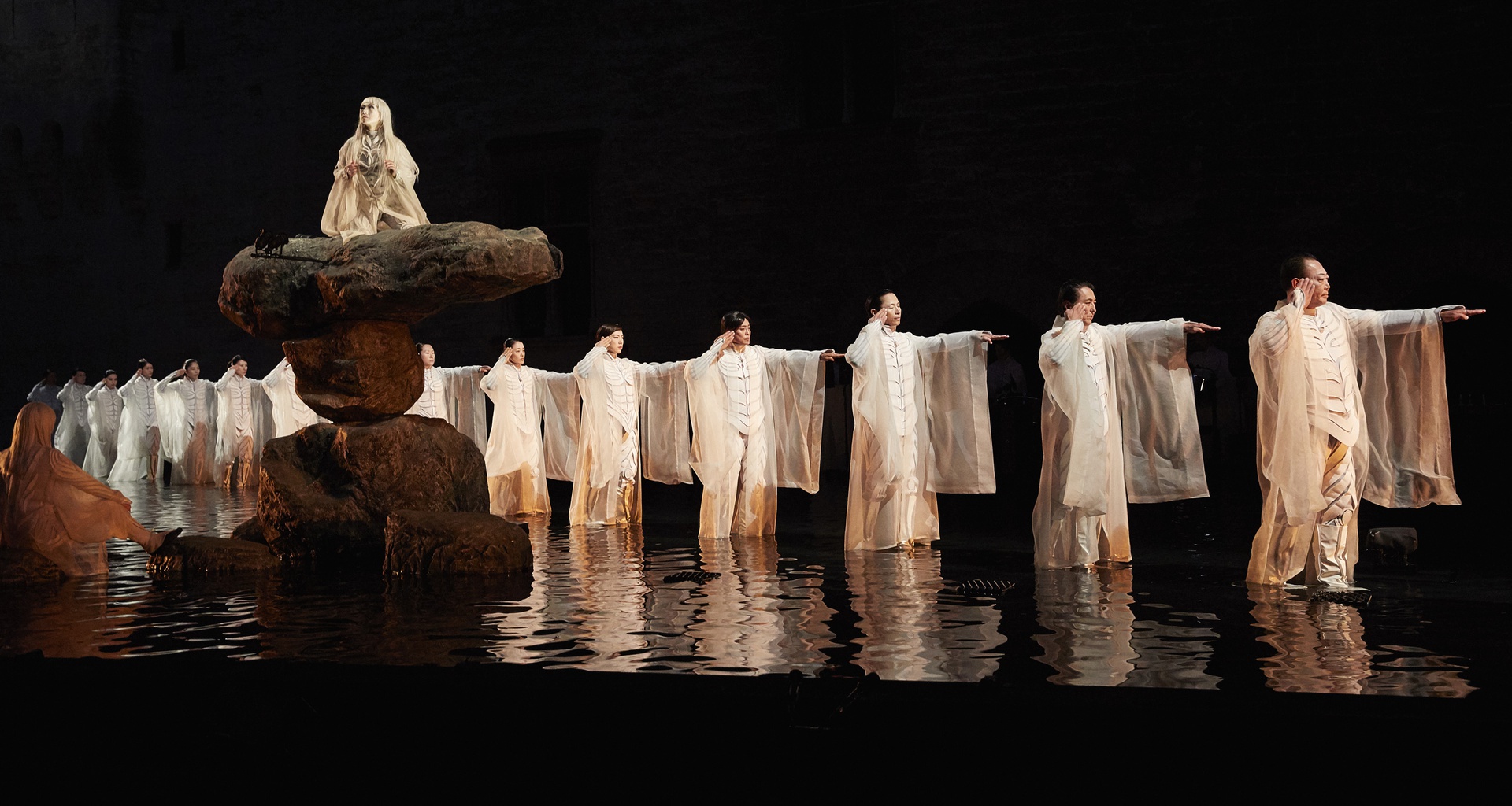 This September, renowned Japanese theater director Satoshi Miyagi brings his intercultural adaptation of Antigone to Park Avenue Armory for its North American premiere in the Wade Thompson Drill Hall. Mixing the foundational principles of Greek tragedy, Japanese Noh theater, Indonesian shadow play, and Buddhist philosophy, this Antigone negotiates the boundaries of ritual and morality while creating a new theatrical universe of globalized proportions. For the second time in the Armory’s history, the Drill Hall will be flooded with water, this time for a version of Sophocles’ tragedy, an integral scenic element that Mr. Miyagi incorporates as part of his production. The director and a cast of 29 reinvigorate this Greek classic, presenting a play about loss and memorialization in a way that is both timeless and timely. The acclaimed production makes its North American debut following its premiere by the Shizuoka Performing Arts Center company at the Cour d’honneur du Palais des Papes in 2017.

“Satoshi Miyagi’s Antigone—with its cross-pollination of cultures, techniques, and aesthetic artistry—is the epitome of programming we support at the Armory. At the Armory, we strive to work with artists who incorporate the space in new and unique ways, and setting this timeless theatrical work within a river in the Drill Hall is exciting and beautiful,” said Rebecca Robertson, Founding President and Executive Producer at Park Avenue Armory and Pierre Audi, the Marina Kellen French Artistic Director at Park Avenue Armory. “We are overjoyed to welcome him and his team to the Armory for what is sure to be a moving and poignant rendition of this classic.”

Sophocles has infused his characters with psychological depth and complexity in this universal play that is as resonant now as when it was written nearly 2,500 years ago. The Greek tragedy hinges on a young girl disobeying the king by giving her brother the same funeral rites that he had been denied after a fratricidal combat, challenging the injustice of men to obey the laws of the gods and following her heart by putting his soul to rest. What follows is an intense exploration of humanity, morality, law, and justice that left few unharmed.

Mr. Miyagi creates a new version of this fabled myth that looks at the ancient play through the prism of Japanese culture and Buddhist philosophy, told through the tradition of Japanese Noh theater. He turns the stage into a flowing river of water, known in many spiritual belief systems to separate the world of the living from that of the dead. Large stones scattered throughout the body of water punctuate the setting for the cast of characters who are embroiled in a bitter war of honor. Drawing on tenets of Noh, the actors move throughout the space with slow, deliberate, and stylized choreography and are dressed in white, skeletal, kimono-style costumes.

“The message of Antigone is a message that was needed in the current moment,” said director Satoshi Miyagi, “I want to convey to the audience a point of view that doesn’t bifurcate things in this world, and polarize everything into being ‘of god’ or ‘of the devil.’ I’m trying to make those kinds of borders less abrupt—more ambiguous.”

Shadow play is also incorporated as a significant production element, with silhouettes projected on the walls of the cavernous, 55,000 square foot Drill Hall. Miyagi uses this device to enlarge the action of the stage, without magnifying the faces of the actors themselves, so that facial expressions are rendered insignificant. As part of the Noh tradition, Miyagi has decoupled movement and language so that the main actors create the visual landscape through gesture, on stage and in shadow, while the chorus provides the aural experience with spoken word and accompanying music.

In conjunction with the production, the Armory will host an Artist Talk on Friday, October 4 at 6:30 pm, featuring Director Satoshi Miyagi and his collaborators discussing the infusion of Japanese Noh theater and other global traditions in the retelling of a classic Greek tragedy. The Armory will host a student performance, and there will be additional community programming in partnership with the Japan Foundation, to be announced at a later date.

Antigone is part of Park Avenue Armory’s 2019 season that continues with: Theaster Gates’ renowned Black Artists Retreat, a multi-day convening of black artists, which will include public events such as a celebration in the Wade Thompson Drill Hall with roller skating, DJs, and performers, along with keynote conversations as part of the weekend’s event; and the world premiere of a new adaptation by Obie Award-winning Pulitzer Prize finalist Christopher Shinn of the gripping moral parable Judgment Day, in a new production commissioned by the Armory and staged by award-winning director Richard Jones.

Previous theatrical productions at the Armory include Sam Mendes’ hit production of The Lehman Trilogy, adapted by Ben Power and starring Adam Godley, Ben Miles, and Simon Russell Beale; Ivo van Hove’s chilling staging of The Damned; Simon Stone’s critically acclaimed, Obie Award-winning, and four-time Drama Desk-nominated production Yerma, starring Billie Piper and performed within glass walls; Obie Award-winning and eight-time Drama Desk-nominated play The Hairy Ape, directed by Richard Jones and starring Bobby Cannavale in a production where the audience was surrounded by a massive revolving stage; Obie Award-winning A Room in India (Une chambre en Inde) with Le Théâtre du Soleil under the direction of Ariane Mnouchkine; Macbeth, directed by Rob Ashford and Kenneth Branagh, and starring Branagh and Alex Kingston for which the Wade Thompson Drill Hall was transformed into a bloody, rainy Scottish heath; and the unprecedented residency of the Royal Shakespeare Company of five productions in repertory over six weeks in association with Lincoln Center Festival.

Antigone is also part of Japan 2019, a series of events highlighting Japanese arts and culture in the United States throughout 2019.