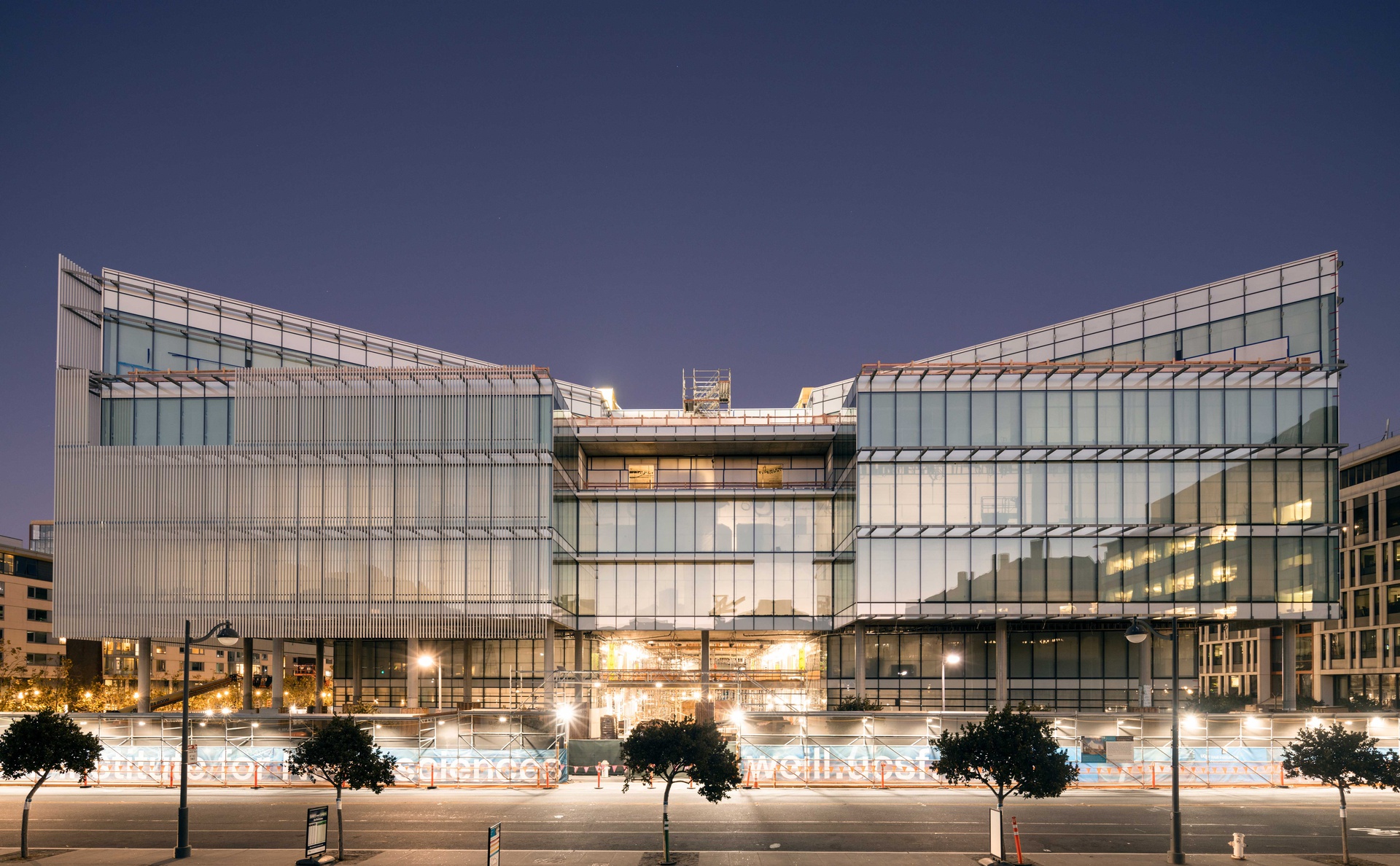 In the coming year, Mark Cavagnero Associates (MCA) will unveil three major projects across the Bay Area that demonstrate the firm’s dedication to community building and its approach to architecture as a civic and social responsibility. While diverse in their programs, the new Bowes Center for Performing Arts at the San Francisco Conservatory of Music, SF State’s new Liberal and Creative Arts Building for Broadcast and Electronic Communications Arts (BECA), and UCSF’s Joan and Sanford I. Weill Neurosciences Building, are united through their focus on fostering creativity and collaboration.

Since its founding in 1993, MCA has created bespoke designs that align a client’s program with a site’s cultural roots and social patterns. With an early focus on cultural institutions, over the past 30-plus years the firm’s portfolio has expanded to embrace civic, commercial, higher education, medical, residential, and workspaces. Other current and recently completed projects include a housing development on Treasure Island, 555 Howard with Renzo Piano Building Workshop, the Ruth Asawa San Francisco School of the Arts, Salesforce London, Salesforce New York, and the Moscone Center Expansion with SOM.

“Working with the Conservatory, SF State, and UCSF builds on our commitment to improving civic life and the public realm through design,” said Mark Cavagnero. “Each of these projects represent visions for a future that values increased connection, access and equity, groundbreaking research and care, so we have designed environments to fuel and expand these goals. Our designs project their missions to connect to their communities, providing opportunities for engagement across the Bay Area.”

The Bowes Center for Performing Arts Opens to Students

Located in the heart of San Francisco’s Civic Center, the city’s performing arts district, the new Ute & William K. Bowes Jr. Center for Performing Arts at the San Francisco Conservatory of Music (SFCM) will open to students this October. A “vertical” campus that incorporates student housing, dining, classrooms, rehearsal rooms, performance spaces, and a radio station all under one roof, the Bowes Center is designed to enable students to create, learn, and share music in an integrated, collaborative environment. The Center is named in honor and recognition of the $46.4M gift from the William K. Bowes, Jr. Foundation, which marks the largest capital gift ever made to a music school; the Foundation’s namesake was a longtime SFCM supporter and trustee. Creating affordable housing for up to 420 students (with occupancy limited during the Coronavirus pandemic), the building also includes 27 rent-stabilized apartments, which upgrade and replace existing units from the site’s previous building, for its prior tenants who will be moving into the new building at their prior rents.

Walking distance to SFCM’s 50 Oak Street location, the Conservatory’s home since 2006, the Bowes Center doubles the school’s square footage and features state-of-the-art teaching facilities and three new performance halls where hundreds of free performances will be held each year. MCA’s design emphasizes transparency, engagement, and light through its exterior of white and transparent glass. Filled with the sights and sounds of music, the Bowes Center will invite passersby at this active intersection to see performances through floor to ceiling windows in its ground floor jewel-box recital hall. The top two floors will glow like a beacon at night, with floor to ceiling windows, and a 200-seat Penthouse Recital Hall, flexible event space, and terrace, offering unparalleled views of City Hall, Davies Symphony Hall, the War Memorial Opera House, and other landmarks. Bowes’ glass exterior posed a unique challenge for MCA, as ensuring acoustic isolation between the building’s interior and exterior, while fine-tuning internal acoustics in spaces encased in glass, required highly technical solutions.

On the Bowes Center’s second level, a Center for New Media features studio space, lesson rooms, and critical listening rooms for students participating in the Conservatory’s Technology and Applied Composition Program. Capitalizing on the school’s location in the performing arts district and proximity to Silicon Valley, the program prepares classically trained composers to score film and video games. The New Media Center will also be used by students in SFCM’s Roots, Jazz, and American Music Program, created in partnership with SFJAZZ. Classrooms, keyboard labs, a black box Technology Hall, and a recording studio for all SFCM students are located in highly acoustically controlled spaces in the basement levels. Floors 3 through 11 hold one, two, and three-bedroom housing units, each acoustically isolated for practicing. One floor is dedicated to housing for San Francisco Ballet Students, as an extension of the Conservatory’s unprecedented partnership with the nearby SF Ballet.

A New Liberal and Creative Arts Building at SF State Opens Spring 2021, The first new Academic Building at the University in 25 Years

The new Liberal and Creative Arts Building for Broadcast and Electronic Communications Arts (BECA) at San Francisco State University will be open for classes for the spring 2021 semester. The first new academic building completed at SF State in 25 years, the 75,000-square-foot facility is a flexible learning and production environment, with multidisciplinary classrooms for electronic media arts, including radio and television. The four-story building features audio recording control rooms and studios, a high-definition television studio with green screen capability, and a television news studio that looks out onto the campus.

MCA’s design balances the diverse needs of the building’s program through its concrete, glass, and steel form. The concrete supports acoustics and limits vibration, while carving out spaces for both large production studios and intimate labs. Glass and steel lighten its sculptural form, inviting the campus in and creating a feeling of openness, juxtaposed with the concrete.

The Joan and Sanford I. Weill Neurosciences Building at UCSF to Open in 2021, the First Building to Combine the Study and Treatment of Neuroscience and Psychiatry

At UCSF’s Mission Bay campus, the Joan and Sanford I. Weill Neurosciences Building is slated for completion in spring 2021. The first center to integrate the research and treatment of neuroscience and psychiatry, the new building will become the hub for Neuroscience treatment at UCSF and will host the world-leading UCSF Weill Institute for Neurosciences to connect leading researchers and physicians in a state-of-the-art facility. Uniting the departments of Neurology, Psychiatry, and Neurological Surgery, the Weill Institute will provide new pathways for mental health, bringing together 100 UCSF faculty members and 17 basic-science and clinical departments to solve challenging conditions of the human brain and reduce suffering from neurologic and psychiatric diseases with unrivaled clinical care. The building is named in recognition of the Weill Family Foundation and Joan and Sanford I. “Sandy” Weill’s gift of $185 million, given to create the Institute to accelerate the development of new therapies for diseases affecting the brain and nervous system, including psychiatric disorders. Empowering and encouraging an integrated approach to research, discovery, diagnosis and care, the new building will host some of the world’s brightest minds, becoming a beacon of hope for future breakthroughs in some of the most profound issues of our time.

At 281,800-square-feet, the building is composed of two program-driven structures: a four-story research block that is lifted above a transparent, two-story clinical volume. A central hall connects the two structures, brings in natural light and connection, and provides a pathway between the city and campus. Its glass exterior is wrapped in an architectural screen that filters heat and glare while maximizing daylight for its occupants. The screen stops at the building’s center, offering additional transparency at its social heart. Indicative of MCA’s style with its focus on light, expression of program through form, and sensitivity to purpose and place, the Joan & Sanford I. Weill Neurosciences Building creates a new environment for cross-disciplinary science and discovery, manifesting the groundbreaking research and treatments envisioned within it.

MCA’s vision is responsive to the ever-evolving need to unify the social and built environments. The firm consistently pursues design solutions that will ensure long-term benefits for their communities to build resources that will last for generations. In pursuit of innovation, MCA investigates design concepts through an iterative process that resolves complex design issues with clarity and simplicity.

Through the values instilled by founder, Mark Cavagnero, MCA is especially sensitive to the cultural heritage and the legacy of place. Adhering to this philosophy by carefully investigating the alignment of each client’s program with a site’s cultural roots and social patterns of place, MCA designs a specific response to each context.

The firm was founded in 1988 as Barnes and Cavagnero, and in 1993 became Mark Cavagnero Associates, grounded in a set of core values with a strong focus on public and institutional projects and a belief in the power of collaboration and community building. MCA consists of over 70 multi-disciplinary professionals who are committed to its socially- and environmentally-conscious practice, which has made significant contributions to San Francisco’s civic life.